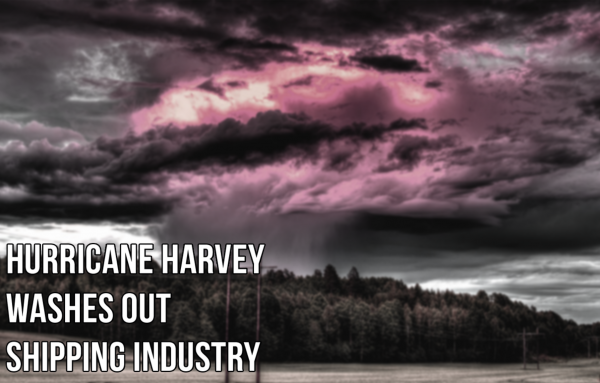 Last week, the strongest storm to hit the continental United States in 12 years has caused serious problems within the transportation and shipping industry. The devastation wrought by Hurricane Harvey caused massive amounts of flooding and damage in the Houston area. Thus far, Harvey has shattered the previous records for continuous rainfall by a tropical storm in the United States.

An estimated 10 percent of all truck shipments will be affected by the storm this week. The subsequent effects will likely result in rise in shipping costs, especially for Texas, Louisiana and surrounding states. To better illustrate the shipping slowdown, traffic data was gathered from more than 50,000 commercial vehicles in the greater Houston area in the days prior to Harvey making landfall. According to CNBC, this past Monday (August 28), after the worst of Harvey had passed through Houston, traffic data was gathered from the original 50,000+ vehicles which showed an 88 percent drop in commercial vehicle traffic.

With hundreds of roadways still under water and rainfall continuing, freight transportation is expected to experience disruption for a least the next month. That said, the largest effects of Harvey will be realized regionally, affecting only 2 percent of national freight shipping but 25 percent of shipping on a regional level. The storm has not only affected the trucking and freight industry, but shipping as well.

Hurricane Harvey forced officials to close the Port of Houston which takes in an estimated weekly total of 4 million tons of cargo. Harvey has effectively shut down every facet of any supply chain that begins in Houston. Not only does this slow down the shipping industry but it was also cost freight and shipping companies more to fuel their trucks as the Houston area serves as the nation’s oil capital.

Houston and the Port of Houston are absolutely vital to the oil and gas industry. Roughly 4.9 million barrels of crude oil come through the Port of Houston each day and according to Trucker.com, as of August 28, 2.2 million barrels a day worth of refining capacity remain shut down in the Houston area. To put this in simpler terms, nearly five million barrels of crude oil are not able to make it to Houston due to the port being closed. This means that even if the Houston oil refineries were open, they would not be able to receive the crude oil to be refined into gasoline. All of the aforementioned events will likely result in higher gas prices for everyone. Everyone includes those shipping and freight companies increasing their shipping rates. The higher shipping rates will be a direct result of the high gas prices. The more it costs a company to fuel their truck to ship your package, the more they’ll charge to ship your package.

Keep in mind that all news reports you see about estimated amounts of damage and delays are just that, estimates. The reality is we won’t know how much damage has been done until the water recedes and crews can get back into the city and asses it. That said, with damage estimates ranging from the tens to the hundreds of billions it isn’t unfair to speculate the possibility of significant damage to Houston’s infrastructure. This could mean roads, highways, ports and warehouses needing repair before major shipping activity can resume.

According to KPBS, at the time this blog is published, Houston’s airports and ports have started to open. Roger Guenther, executive director at Port of Houston, had this to say about the damage to the port,  “Our container facilities, our general cargo facilities received minimal damage. There weren’t the high winds we saw in Ike (Hurricane Ike). This was all about the tremendous amount of water that’s been dumped into the channel.” Houston’s shipping channel will have to be surveyed for debris and other hazards before it’s clear to open again.

As of now August 31 at 11:28 a.m Hurricane Harvey has been downgraded to a Tropical Depression and has entirely moved out of the Houston area. The storm is now primarily focused approximately 15 miles south of Monroe, Louisiana.