The growth of the Internet and the widespread access of smart devices has turned eCommerce into a force to be reckoned with in the United States. In 2013, eCommerce sales reached nearly $232 billion. Current estimates expect this number to grow to nearly $370 billion by the end of 2017! Studies indicate that over 50 percent of U.S. consumers are more likely to make a purchase online as opposed to buying the same item in a store. These studies have also shown that 67 percent of millennials and 56 percent of Gen Xers prefer to shop online rather than a brick in mortar store. The ability to shop for the best deals online makes eCommerce more convenient than walking from store to store, especially when you can find exactly what you are looking for and have it delivered to your doorstep.

KCSmartPort has stated that the Kansas City area has embraced the growth of the eCommerce industry. Over the past several years, the metro area has been able to attract large eCommerce companies who have pledged to create more than 4,000 new jobs, invest $107.12 million and occupy 3.2 million square feet of warehousing space. These companies were attracted to the area due to Kansas City’s central location and the available skilled workforce, both ideal to a successful eCommerce strategy.

By locating in the Kansas City area, manufacturers and shippers have the ability to reach over 80 percent of the United States within one to two days. Companies such as Amazon, one of the largest online retailers in the world that counts for 53 percent of the online retail market for the United States, understand the importance of quickly fulfilling online orders. Amazon sees the city’s location as an asset, so much so that it’s planning to build its newest distribution center in the metro area. The retail giant’s investment shows the true growth potential for the logistics market in Kansas City. 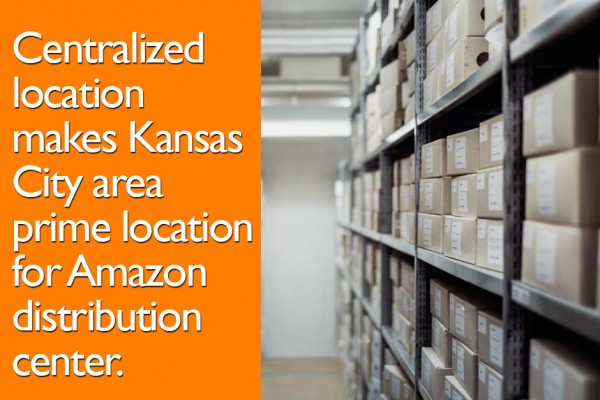